The dash for cash

The end of the calendar year often leads to reflection on how one’s investments have performed. Many savers are questioning the wisdom of investing in South African equities after a lean period, especially relative to what must currently feel like the safe haven of cash. This has led to a surge in interest in money market and income funds.

Graph 1 puts the last five calendar years into perspective. It assumes that each year an investor had a choice to invest in the FTSE/JSE All Share Index (ALSI) or in cash and calculates the excess return the investor received: When the red bar is above zero, equities performed better than cash, and vice versa. One can immediately see what a tough period it has been for equity investors despite Naspers returning a cumulative 167% over the period. Indeed, the simple five-year average excess return is now negative in contrast to the 118-year average of 8%. 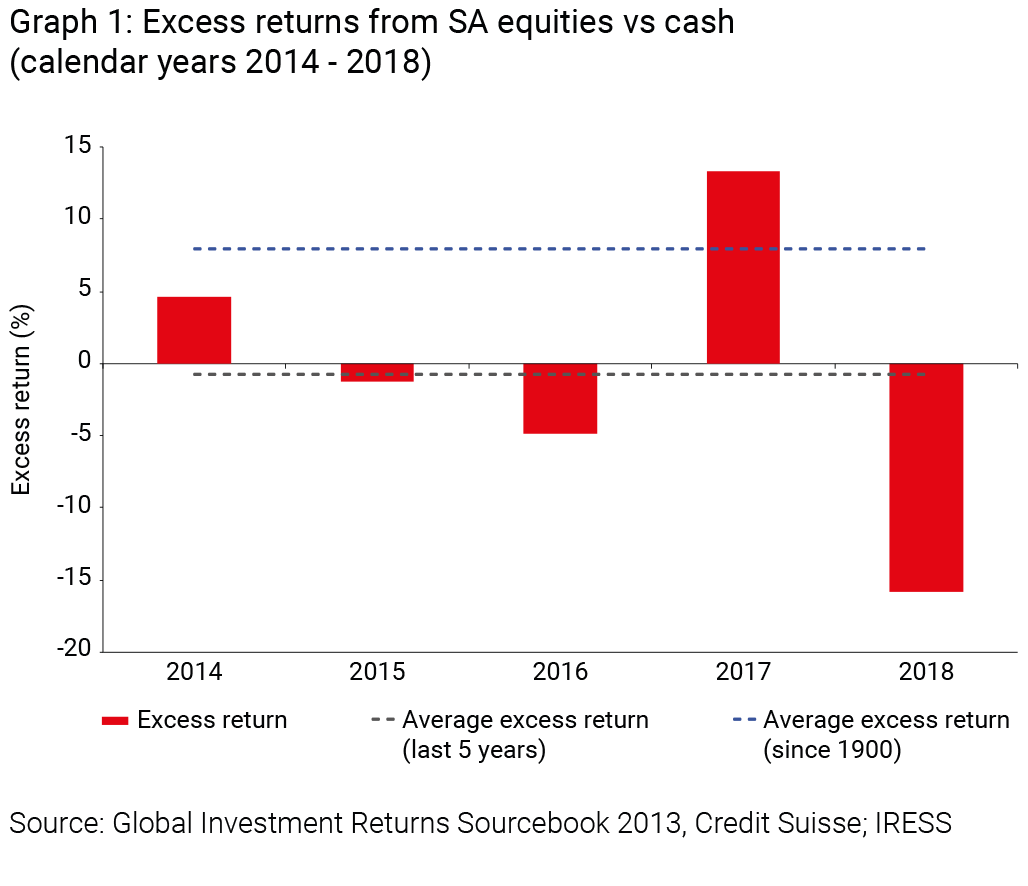 We’ve been here before

This period feels somewhat similar to 2002 and 2003 when South African equities had underperformed cash over the prior five years, as shown by the red line in Graph 2. The annual excess returns shown by the grey line were particularly poor, with equity investors experiencing significant underperformance during 2002 and 2003. With valuations low and sentiment negative, the market was priced to (and did) embark on a great bull run (even when measured in US dollars) following that period of poor performance from equities. We must however state that today’s valuations are not as low as they were then. 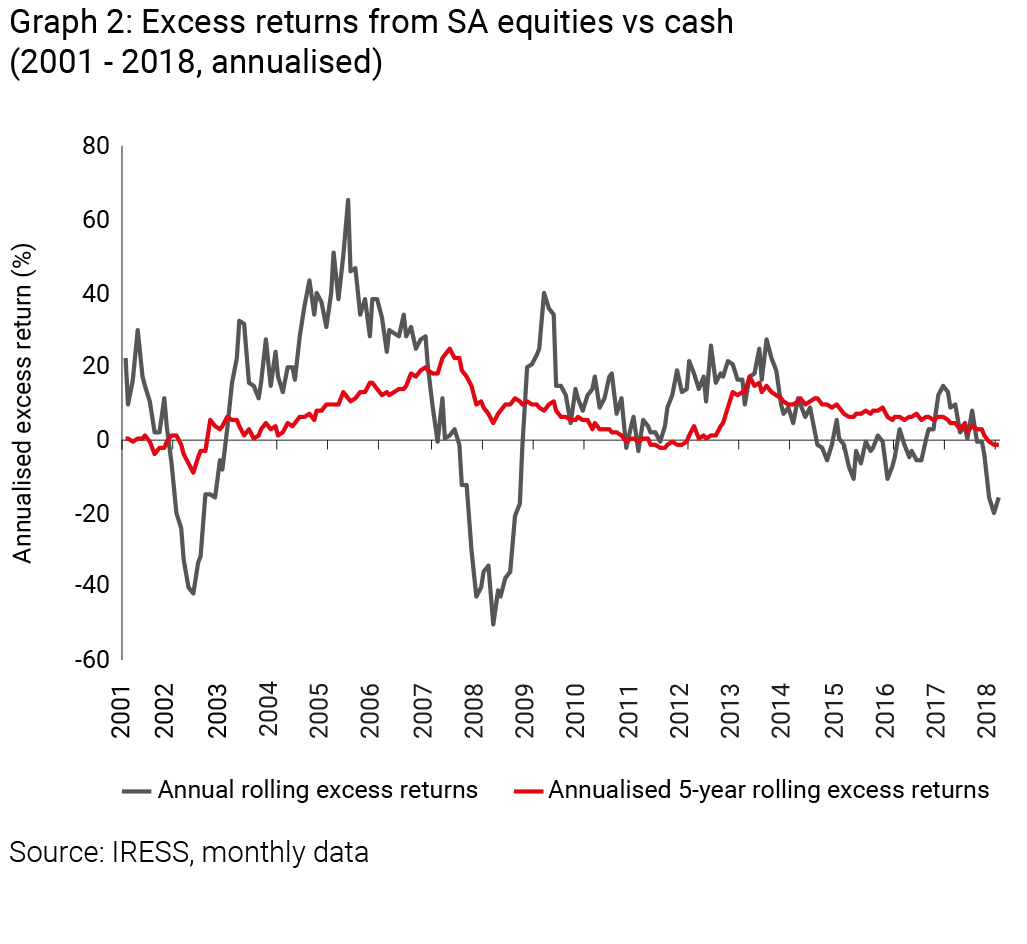 What about the really long-term picture?

Graph 3 highlights periods when South African equities had underperformed cash over a five-year calendar period starting in 1900. These periods are represented by the grey bars. 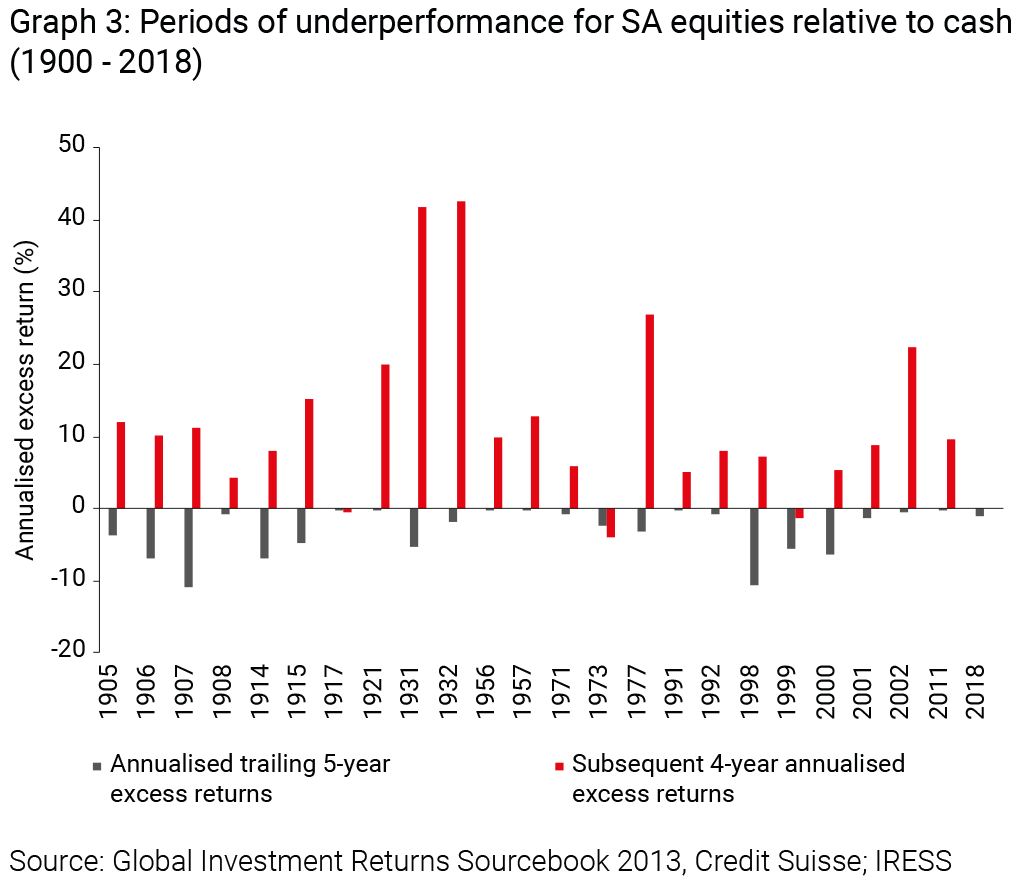 The red bars represent the subsequent four-year excess return of equities versus cash (we normally assess potential investments on a four-year view). Besides the point that you did not want to be significantly overweight equities going into the Great Depression (1929) and the Asian financial crisis (1997), the data does show a generally pleasing picture of strong outperformance by equities after the periods of underperformance. After such points in time, as shown in the grey bars, where equities have underperformed cash, the subsequent four-year excess returns have been positive over 85% of the time, with the average annualised four-year excess returns more than 50% higher than their long-term average.

Light at the end of the tunnel?

It takes depressed valuations and negative sentiment to set the ground for strong excess returns. With the ALSI, when measured in US dollars, at the same level it was in April 2007, it should be no surprise that we are finding more opportunities in South African equities than we have for some time (other than the brief few months during what has become known as Nenegate).

While one cannot be sure what lies ahead, history strongly suggests that there is a higher probability of a positive rather than a negative outcome for equity investors who have a long-term investment horizon. The ALSI has been valued lower before and companies' profits are under pressure, but now does not appear to be the time to have 100% of your assets invested in rand-based money market funds.

Duncan was appointed chief investment officer in 2020. He joined Allan Gray in 2001 and was appointed as a portfolio manager in 2005. He manages a portion of the equity, balanced and stable portfolios. He is also a director of Allan Gray Group Proprietary Limited and Allan Gray Proprietary Limited. Duncan holds an Honours degree in Business Science and a Postgraduate Diploma in Accounting from the University of Cape Town and is a CFA® and CMT® charterholder.

Nathan joined Allan Gray in 2015 and is a business analyst in the Institutional Clients team. He holds a Bachelor of Business Science degree in Economics from the University of Cape Town.

WATCH : It’s the price you pay that matters

As investors we shouldn&rsquo;t pretend we operate in a vacuum that is nicely insulated from the prevailing macroeconomic and political trends. However, it is...

How not to succumb to chasing the money

Many investors are still reeling from the COVID-19 rollercoaster ride and are grappling with how to position their portfolios when they value both capital...

In a recent webinar, Portfolio Manager Tim Acker discussed the investment environment and looked at how the Allan Gray Balanced Fund is positioned to take...

One of the most unappreciated assets in a portfolio is optionality – the ability to take advantage of market disparity and to move between and within asset...