The price of money, the shortage of energy, and the monster of inflation

What happens when the price of money and time gets set to nil? Over the past 40 years, we have been living through one of the greatest financial experiments of our time. Thalia Petousis discusses its impact on financial markets, global trade financing and the energy sector, as well as how central banks are now waging a war against a monster of their own creation.

A compelling definition of an interest rate is “the price of money”, and it is surely the basis of the entire financial system. As the brilliant author Edward Chancellor writes, another important definition of interest is “the price of time” – which captures its temporal nature and the opportunity cost of making a loan. My personal favourite of the definitions is “the price of my anxiety”, which reflects the lender’s apprehension that the borrower may abscond with their money.

Some of the earliest recorded examples of loans in human civilisation were agricultural in nature, and in Ancient Greece, the word for interest was “tocos” (a calf). When a calf was loaned out, the loan was repaid with many calves. Why? Because interest reflected nature’s ability to reproduce and to be productive.

With that notion in mind, for the past 40 years we have been living in a world where productive growth was flatlining (or trending sideways), but interest rates were simply falling, as seen in Graph 1. 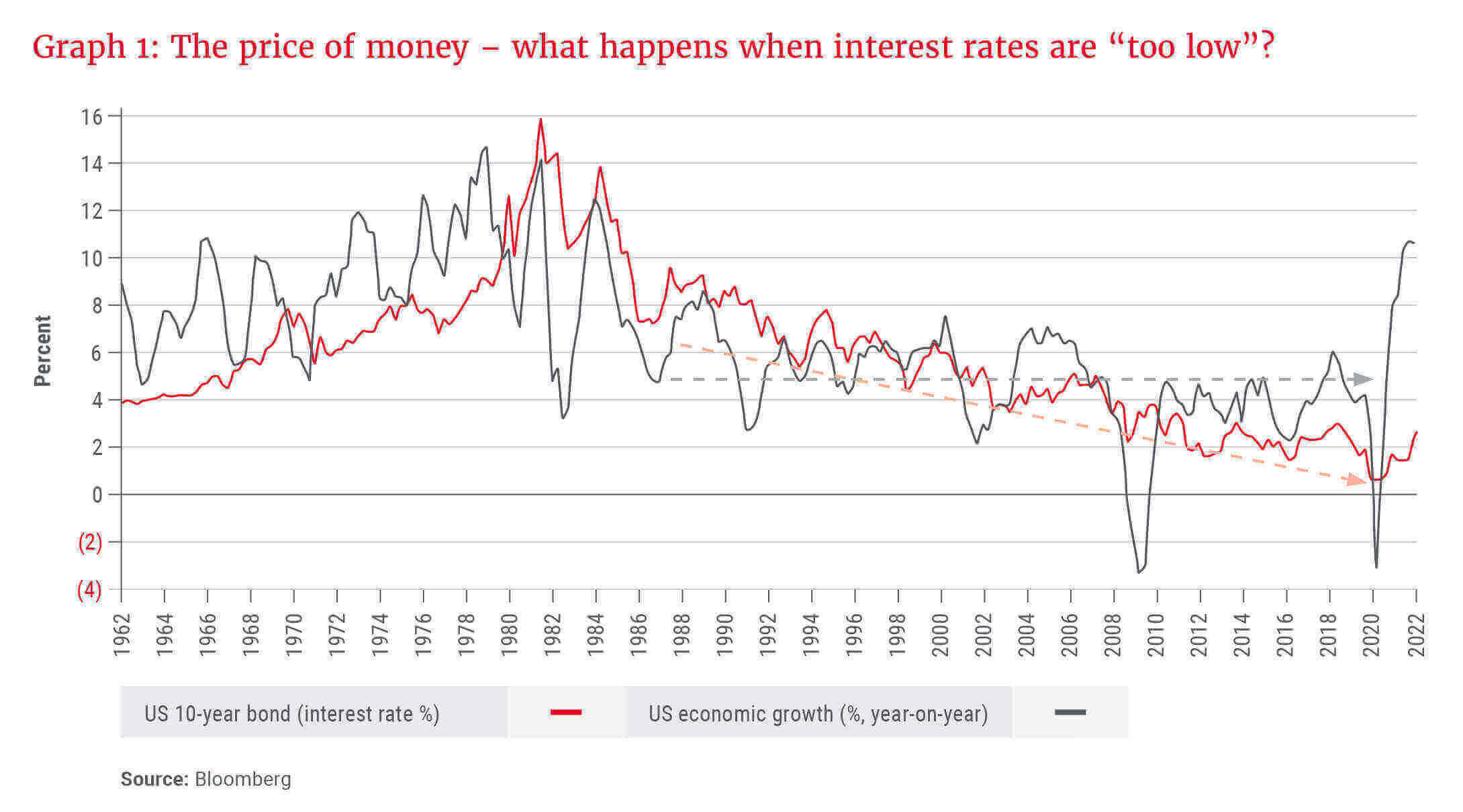 While “falling” imparts the notion that there was some natural tide carrying interest lower, the truth is that an aggressive regime of interest rate cuts was enacted by central bankers for several decades. This baton of interest rate cutting was passed forward until we arrived at a point in 2020 when the US overnight rate reached 0%. “The price of time” was zero, ceasing to exist. The intertemporal bridge of interest linking “now” to the future had been dismantled. This meant that all future earnings could be realised today, and all consumption could take place immediately.

… with a helping hand from global supply chain disruption and the outbreak of war, the rising price tide … turned into a tidal wave.

Under such financial conditions, there has been enormous incentive to borrow excessively, to indulge in overzealous asset and stock market valuations, and to buy into such financially engineered products as cryptocurrencies to earn a rate of return greater than nil. These activities cannot continue on such a grand scale except under the artificial conditions of free money that have given birth to them.

As a result of mispriced money, central banks’ inflationary price “targets” were finally reached. Following this, with a helping hand from global supply chain disruption and the outbreak of war, the rising price tide then turned into a tidal wave.

During a brief 48-hour window in late September 2022, a slew of central bankers across the world hiked rates by a cumulative 600 basis points (6%). Central banks are now raising rates to kill the monster of inflation – one that they ironically created.

Will the rate hikes work? One concern is that pricing feedback loops can run amok once given life, leading inflation to become deeply entrenched in the global economy. Simply put, high prices beget higher prices.

By way of example, the cost of war and geopolitical tensions is often paid for with inflation, but inflation in and of itself has the knock-on impact of (circularly) creating great public and political upheaval. Similarly, what can start as a supply-side energy shock and a rise in fuel prices can also (circularly) be fed by the resulting worker outcry for higher wages. Wage growth has already risen to the realm of 5-7% year-on-year across the US and Europe with anecdotal evidence of a shortage of skilled workers. This is known as the wage-price spiral – a feared “second-round effect” of an initial shock to prices.

Given such circular relationships, to attempt to label inflation as “transitory” and limited only to the realm of an isolated energy shock is to fail to learn from the lessons of Federal Reserve Chair Arthur Burns in the 1970s. Burns branded inflation as “outside of the control of the central bank” for so long that price increases were left unchecked, leading them to ultimately become as sticky as the hot summer’s day in New York City when he completed his education as an economist.

The shortage of energy

When the price of money is too low, there is vast incentive to extend one’s supply chain by several weeks and across several continents – the money is free, after all. The now-rising interest rates and elevated costs of supply chain financing pose a threat to global trade, which has already been disrupted by war and post-pandemic consumer demand.

Much of the European continent faces an energy shortage, heightening the risks of recession. As a tough winter looms, energy conservation measures are observable in parts of Europe and the UK, such as dimmed streetlights and national consumer campaigns to take shorter showers – as seen in the alarming news headlines in Image 1.

The catalyst for this European energy crunch has almost certainly been an overreliance on Russia for oil and gas. Beyond this, the crisis has been exacerbated by inopportune recent weather conditions for wind power generation and a mixed ability for solar (almost anyone who has toured Northern Europe will attest to the latter!). The gasoline to this fire has been a dramatic global underinvestment in traditional energy infrastructure owing to boardroom pressure for decarbonisation. The cost of gas in Europe is expected to rise by EUR1.7tn in 2022 versus the 2019 cost base (equivalent to a 10-fold increase, or 9% of European GDP).

An unanswered question remains how this additional cost burden will be shared across the balance sheets of governments, business, and the consumer. Germany’s producer price inflation (PPI) – the cost of manufacturing and producing goods – rose at 45.8% year-on-year in August, as seen in Graph 2. This is astounding for many reasons, not least of which is that it is equivalent to the August PPI in Ghana – a country whose currency (the Ghanaian cedi) has lost 40% of its value against the US dollar in the last year and that sits on the brink of debt distress. 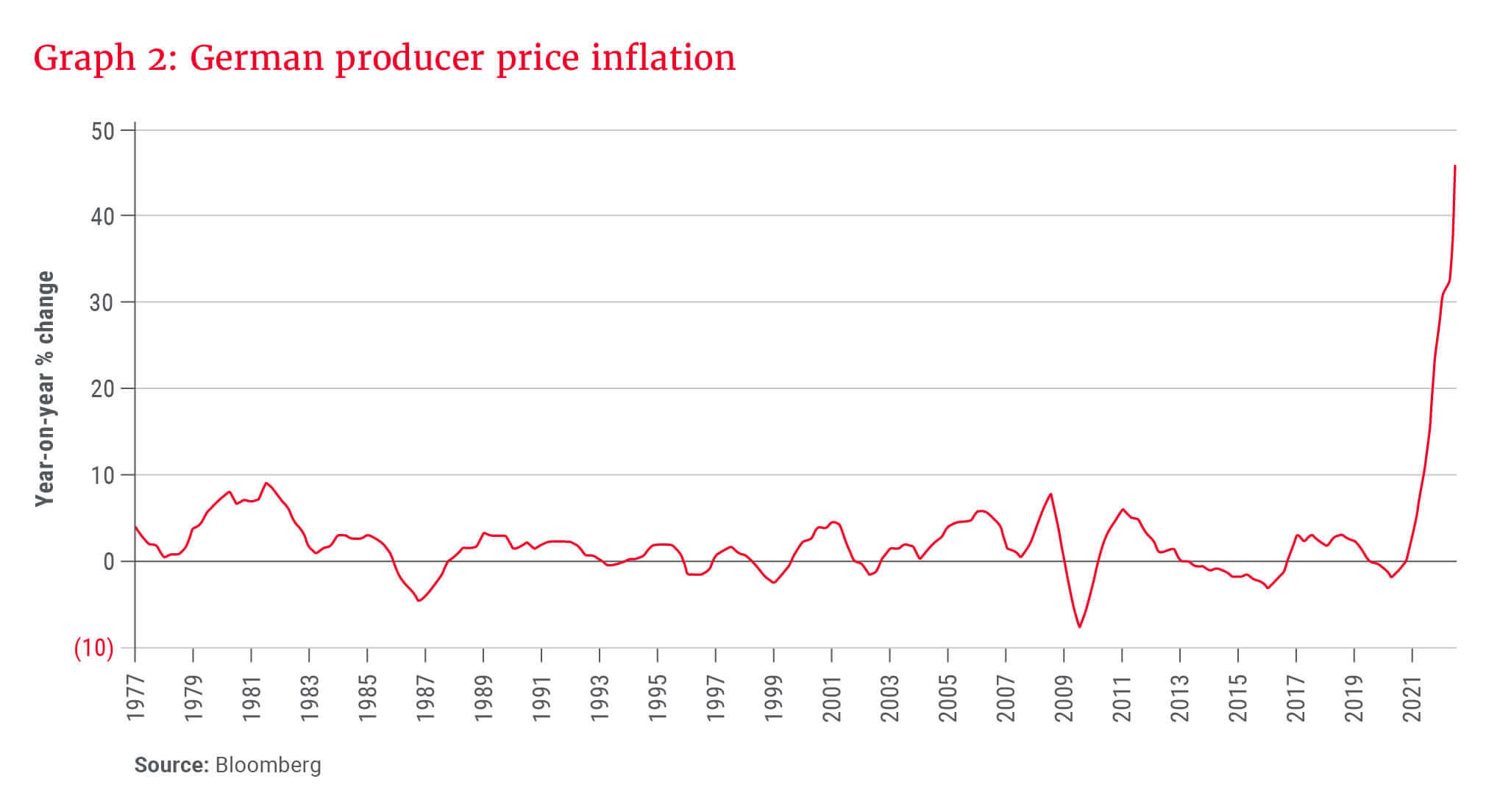 Events might not unfold in such a dramatic way as “South African-style loadshedding”, because the destruction of European energy demand is already being accomplished by a hollowing out of heavy industry. Several EU manufacturers are shutting down production as they struggle to cover their input costs and fail to remain globally competitive.

It is tempting to ask whether EU policymakers who have dragged their feet in signing new domestic energy production deals are not underestimating the scale of the problem. The euro, British pound and South African rand each lost 15-17% of their value against the US dollar in the 12 months to 30 September 2022. Either inflation is the “great equaliser”, or many developed countries are doing their best this year to enact policies that will allow them to join the ranks of the developing economies (or as our chief investment officer, Duncan Artus, likes to cheekily ask our Orbis colleagues in the UK: “How does it feel to be living in an emerging market?”).

These energy reforms, although very welcome, are arriving extremely late. They must bear fruit for South Africa to alter its path …

As South African citizens are painfully aware, energy markets are highly inelastic in terms of demand. The rationing of energy supply results in a major contraction of economic growth and a rising cost of doing business. In terms of bringing new energy supply online, these markets function as huge, costly and laborious battleships to turn. A faster pace of structural and energy reform is being enacted in South Africa after the ANC’s devastating 2021 local government election results and the public outcry in response to Stage 6 loadshedding. A feed-in tariff for rooftop solar power has been approved, as well as the issuance of larger energy licences for private sector renewable energy generation. It remains unclear how the R1.2tn energy investment needed by 2030 will be funded.

These energy reforms, although very welcome, are arriving extremely late. They must bear fruit for South Africa to alter its path – a path which my colleague Sandy McGregor points out has largely been to plod along per the economic stagnation of the Zuma years.

Pay heed to the lessons

As global central banks embark on a brave new journey to restore price stability, one can only hope that their future ranks will pay heed to the lessons of the last four decades and the mispricing of money. If interest rates are marked too low or cease to exist, order will be lost; a country will perpetually exist on the edge of an abyss.

Thalia joined Allan Gray as a fixed interest trader in 2015. She was appointed as a portfolio manager in 2019 and currently manages the money market portfolio as well as a portion of the balanced fixed interest portfolios. Thalia holds a Master of Commerce degree in Mathematical Statistics from the University of Cape Town and is a CFA® charterholder.

2022 saw a massive appreciation of the US dollar against all other currencies and the highest inflation since the early 1980s. These trends, which so dominat...

During the past quarter inflation has remained elevated. In the US the latest print for August was 8.3%. In Europe it was 10.0% in September. Even though in...

Podcast: Can South African investors continue to count on commodities?

In this episode of The Allan Gray Podcast, portfolio managers Sean Munsie and Rory Kutisker-Jacobson and investment analyst Jithen Pillay discuss the cyclica...

In the past 12 months , global inflation has surged. Sandy McGregor discusses the increasingly turbulent response of the financial markets.